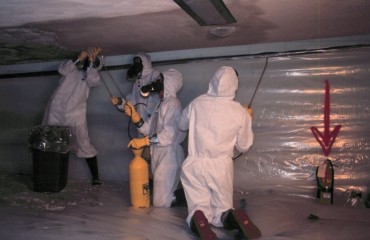 One of the most pressing concerns of any potential homeowner is whether or not a potential home contains materials laden with asbestos. It is now common knowledge that asbestos contains cancer causing fibers that produce an incurable form of lung cancer. Thousands of people a year die from asbestos related illnesses which has lead to a greater awareness of this deadly particulate.

It can be confusing to determine what materials contain asbestos and what materials are harmless. Jonny on the Spot home inspections is well versed on every type of construction material produced with this deadly fiber. The good news is, asbestos insulation is generally only found in homes built from the early 1930’s through the 1950’s. Also, textured or pop corned ceilings were comprised of asbestos all the way up until 1977 when it was banned. Generally speaking, asbestos will not be found anywhere in a home that was built after 1977.

So you live in a older home or are thinking about purchasing that beautifully constructed 1950 colonial. Be aware there is no guaranteed way to prove a material has asbestos unless it is tested in a lab, however, it is well known to exist in the following materials.

(Above Picture) Vermiculite contains asbestos and looks like small fibrous pebbles. Notice how it was hidden underneath fiberglass insulation batts. Jonny on the Spot always discovers these concealment methods. Performing home inspections in Winston-Salem and all over North Carolina I have seen vermiculite in countless numbers of homes.

Another common area that asbestos can be found is within textured or pop corn ceilings. These rather ugly ceilings have lost popularity since the 1980’s and are many times removed from older homes by scraping them off. This can become an issue because scraping asbestos laden textured ceilings can literally release cancer causing particulate throughout an entire home including the ventilation systems. Below is a picture of a ceiling that is known to contain asbestos. 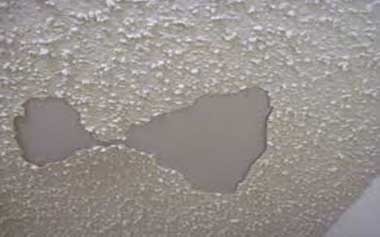 If a home has pop corn ceilings containing asbestos it is not necessarily dangerous unless it is disturbed. The issue arises when you want to repaint or add a new light fixture to the ceiling which carries risks of disturbing the particulate and releasing the deadly fibers into the air. Before any work is to be done on a pop corn ceiling in a house built before 1980, it must be tested by a certified lab. Unfortunately, many people do not want to pay the cost of the test and remove the pop corn without precautions.

The above locations are where asbestos is found the majority of the time, but is not everywhere this nasty little fiber is found. Some vinyl floors, pipe wrapping, mastic glue, door gaskets, and many other materials contain asbestos. Rest assured, Jonny on the Spot home inspections will locate any potential areas that pose a health hazard inside a home.

My name is Jonathan Salmon and I am the owner/operator of Jonny on the Spot Home Inspections. I have been in the construction trade for a lifetime starting at age 18 when I began trade school in the field of HVAC. After completing an A.S. degree in HVAC I worked in Virginia Beach alongside a general contractor building and designing all aspects of residential homes. It is here where I spent 10 years mastering every element the construction trade......